The type of intense physical exertion athletes thrive on may put additional strain on the respiratory system above and beyond what the average person experiences. There is nothing worse than feeling added stress to your lungs - especially as an athlete. RidgeCrest Herbals' ClearLungs® Sport provides support specific to the respiratory needs of those who excel. And by excel, I mean who do great things, not those who can use a spreadsheet.


The phytochemicals within this plant are said to help support the body in white blood cell production. Renowned for its ability to encourage a positive immune response, Dong Quai Root has many wellness-promoting properties. Studies show it may help the body's ability to naturally dilate bronchioles to support open airways and encourage circulation to the lungs and respiratory system. In addition, it contains small amounts of vitamins A and E, biotin, carotene, and pantothenic acid.


Ophiopogon helps restore the human systems' essential moisture and bodily fluids. It is especially effective in bringing moisture back to the lungs and helping the body to balance normal mucus levels. Exceptional for treating external conditions that may dry and irritate lungs, such as smoke to dust, inversion, winter weather, insufficient humidity, etc.


Poria, which contains multiple vitamins and other nutrients essential to healthy cardiac function and blood circulation, is used in Traditional Chinese Medicine to rid the body of excess "dampness." In the process, it helps balance electrolytes and revitalizes the spleen, which is responsible for storing half of the body's white blood cells (monocytes). This supports the immune system and helps it function properly.


Chinese asparagus root is called the "Queen" of herbs due to its wide range of effective properties. It is particularly known as a lung tonic recognized for its potential to help support the body moisten and gently cleanse the lungs and respiratory tissues.


Chinese Skullcap is one of the most widely-used herbs in Chinese medicine, particularly as support for the bronchioles and the larger respiratory system. Skullcap contains compounds that support the body's natural, healthy state free from excess inflammation, encourage natural immune function, and promote healthy urine flow, bile production, and more.


Luo Han Guo Fruit is used in Traditional Chinese Medicine for respiratory and lung support. High in Vitamin C, it is also recognized in TCM as a "guiding herb" to direct other herbs towards the upper body, especially the respiratory system.


Platycodon is included in this formula for its ability to focus support on the chest, help phlegm management throughout the system, aid respiratory and sinus health, and support loosening and comfort in the lungs.


Commonly used in traditional Chinese herbal combinations for its ability to help the body build respiratory function, and for its properties as a tonic for the liver, kidney, and lungs.


Most commonly used to support the body's ability to deal with conditions relating to the heart and lungs. Specifically, it is used to help balance mucus, avoid system stagnation, nourish the lymphatic system, and support overall cardiovascular function.


Known for its extraordinary adaptogenic properties including the ability to potentially help normalize and balance multiple human systems, this herb promotes oxygen supply for the cells, supports the body's immune system, protects against stress and builds stamina.


One of the most widely-used herbs in TCM, licorice is used to stimulate, support, and harmonize gland function. It helps support the adrenal glands and immune system, energy production, and aids cellular removal of toxins. Scientific evidence exists indicating its ability to reinforce the body's natural, healthy state free from excess inflammation. Licorice root contains glycyrrhizin, a chemical compound that maintains the body's ability to block enzymes that lower the prostaglandin levels responsible for mucus production. It also acts as a guiding herb to enhance the activities of other key ingredients.


A form of mushroom, Cordyceps have been used both in TCM and Tibetan traditional medicine for at least 600 years, and possibly much longer. Believed to tonify the lungs and assist with Yin deficiency symptoms and moisture overproduction in the lungs, cordyceps attach to plants, insects, and even other fungi. Some research has shown they may help assist with muscle recovery after exertion and support the body's natural, healthy state free from excess inflammation.


First notated in Ancient Greece, Rhodiola is known to have been used in Tibet and China in early civilizations. Seen as a blessed plant, it was often bequeathed to newly-married couples in Siberia as a good luck charm. In TCM it was believed to nourish Chi and with over 180 studies internationally, it is now known to have adaptogenic properties. Though only newly popular in the West, it has been used as a supplement for Russian Olympians and cosmonauts to support physical endurance.


Eleuthero root was the first well-studied adaptogen and is responsible for the entire classification. An adaptogen is a substance that promotes the body's overall capacity to handle non-specific forms of stress. By helping the body find homeostasis, it supports the ability to respond to external forces. It has been part of TCM since its foundation but was only recognized by the rest of the world in the 1960's thanks to the work of Russian scientists.


Availablend™ is RidgeCrest Herbals' patented blend containing several ingredients that have been recognized for their digestive and bioavailability-supporting properties. It includes ginger root, black pepper, habanero pepper, and Sichuan pepper.* 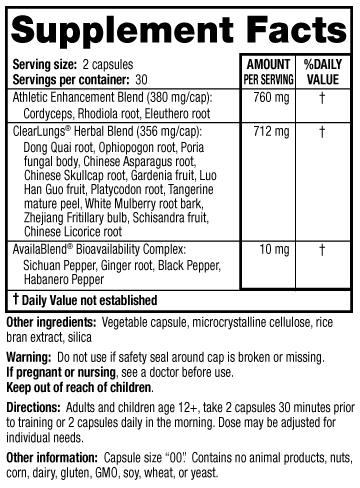